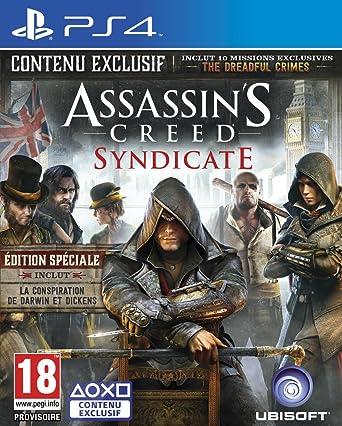 Description Assassin's Creed Syndicate is the 2015 videogame of the Ubisoft star saga, Assassin's Creed that has several titles bringing us action adventures in the open world starring memorable characters from that era. The heroes on this occasion are two, a pair of twin brothers named Jacob and Evie Frye, who move in the nineteenth-century London that Ubisoft Quebec has developed with such success.

The peculiar confrontation between Assassins and Templarios of this delivery takes us to the impressive British capital in the 19th century, right in the middle of the Industrial Revolution. From Buckingham Palace to Whitechapel through the underground tunnels, the gigantic open world of Victoriano London is a faithful witness of a historic revolution, but also of a revolution of the working classes that, clandestinely, organize themselves into bands to survive and fight for equality in an adventure with many missions of liberation of children and women little less than enslaved.

A reply would be much appreciated.

EmTeaZy wrote: ↑
Sat Mar 16, 2019 8:28 am
Is this game in English? Looks like Spanish... Can someone let me know? I really don't want to download all this data only to find out the game is in Spanish and I can't play it.

A reply would be much appreciated.