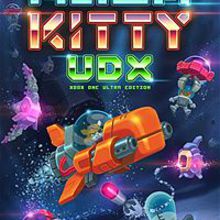 Description Your mission ? Save working cats under water who "grow" underwater milk. As said above, the gameplay is from the 80s with a handling in the Defender, the classic retro which has still aged a lot. And too bad for those, like me, who thought of leaving in a Shoot 'Em Up pure and hard. Here, the gameplay consists of confronting, horizontally, waves of successive enemies who attack your cats-workers. You can move freely from top to bottom and from left to right by varying the orientation of the vehicle with a single touch. If one of your cat-worker is embarked by an enemy, it will quickly save it on pain of losing valuable points (or lose the level if you have more). At the end of each level, you face a boss who will be a little more twisted. But to help you, there are many power-ups that will diversify at least the gameplay.

The difficulty curve is interesting, but you will love the gameplay before anything else you will quickly win. The arcade mode offers good replayability since the levels are basically harder because you only have one life. Finally, if you get to understand the menu messy and unreadable game. Another brake that should leave a lot of players on the sidelines in the first part. For big players and fans of this atypical gameplay, there is of course an online ranking that boosts the life, necessarily.

Fortunately, this version UDX offers an original mode: the Dreadnought mode that still comes out quite a beaten path. You must always defend your workers, but this time trying to destroy more and more complex mechanical monstrosities, all in a certain amount of time. Well thought out and refreshing, this mode almost relays the other two to the ranks of the additional modes and gives the desire to seriously recover to this opus, in any case give him a second chance. Even if it will this time be adept of die and retry.

Technically clean, the soundtrack even finds the right idea to be catchy. On the other hand we will pity on the readability which is a little complicated in portable mode. The game is much more pleasant on PC, so we advise you to play in lounge mode. The game is even playable to two with each his joy-con.

Re: Angels of death